Between August 9 and August 16, 2021, Amateur Radio Operators from around the world launched a
massive Special Event operation in commemorating what would have been Jacob's 90th Birthday!
This operation culminated in over 140,000 QSOs.

Jacob and I met in January of 1976, in Leningrad (St. Petersburg those days). &nbspI had just lost my father.  One of my relatives who worked with Jacob and knew of my ham radio hobby offered to introduce me to him hoping to somehow help get my mind off my painful loss.  I was 15 years old and meeting the famous "UA1FA" was a thrill of a lifetime.  I had read about him in a booklet about ham radio (I still own the publication). Jacob was one of the most well known hams in all of Russia.

To this day I remember that visit. He lived in a spacious apartment (my family lived in a communal apartment with two other families, where we occupied two small rooms) and he had a most wonderful ham station - a gleaming greenish transceiver with a scope with a semi-circular scale. Astonishingly, this was a home brew radio he had designed and built himself.  He had a rotatable Yagi antenna on top of his building (another most amazing Amateur Radio attribute for Russia at the time).  I could barely contain my excitement!  I didn't have a personal callsign and was only a short-wave listener, just beginning to learn about the hobby.  For me, being in Jacobs Ham station was totally mesmerizing and very magical.  Etched in my memory is how he casually made a phone QSO with an Italian station on a crystal-clear channel.  Jacob's remarkable home brew transceiver is still alive and well.  It periodically sees action at a Ham Radio Club station in Kronshtadt (a part of St. Petersburg).

Jacob later helped me acquire a Soviet-made real communications R250 radio for my SWL (he introduced me to someone who was selling it).  We have seen each other at the Short-wave section meetings held monthly at LSKW (Leningrad HF club section) and spoke on the phone periodically.  He a true mentor, my Elmer!  He was one of examiners overseeing my first ham exam at the Radio Club in 1978.  Even though I passed the tests, I never received a license.  My late dad had relatives abroad and the KGB considered me a security risk to the Soviet Union.  It was a tragedy for me.  I only told a few people about this and Jacob was one of them.

In 1979 when the Soviet border "gates" opened up slightly for Jewish immigration my family and I left the USSR. Before departure, I spoke to Jacob and told him of our decision.  I told him I would try to become a ham in the USA, where we were heading and that I would stay in touch.  He hinted about his restricted ability to receive letters from abroad - he had a security clearance where he was employed.  He worked on electronics for the military and space program.  When we saw each other 13 years later, with the final collapse of the Communists Party in Russia, he was verbally and openly critical of the Communists who ruled Russia for too long!

Soon thereafter I did become a ham in America, got my Novice license.  There was not a happier guy in the entire world.  And then put a station on the air from Brooklyn, NY.  When I could reach anyone in Leningrad on 20 meters, I would pass regards to Jacob, probably scaring the living daylights out of the locals (who is this Russian-speaking American ham who knows someone in Leningrad?  For a while I was a suspicious character to many in those days).  I think I even managed few contacts with Jacob from New York (initially with a dipole and 100 watts, to be upgraded later).  The story relating to my Ham radio life in Russia and then the United States is here to read.

In 1990 I heard that Jacob had retired from the place he worked for and security clearance no longer applied.  Perestroyka was raging on in the USSR.  I spoke to him on the air and he mentioned that he could now see foreign guests.  So, he told me if I ever got around visiting Leningrad which soon became St. Petersburg, I was very welcome to be a guest in his home.  And, that did happen in the summer of 1991.

Then as an adult, I really got to know him much better.  Despite a significant age difference, we had a lot in common.  We both loved our hobby.  Each of us contributed to it in his own way.  He built transceivers at a time transceivers were not being offered for sale in the USSR.  Together with his late friend and mentor, George UA1AB, they designed and constructed a number of different transceivers using then available parts.  The schematics and plans were published in the Russian "Radio Magazine" for all to read and possibly replicate.  One of the most successful designs really took off, and many hams built these radios, to get on the air on phone and CW.  He wasn't alone, of course. UW3DI radio design was probably even more popular, but Jacob was careful to offer schematics with parts that can be obtained by common folks. What good was to offer a transceiver design with exotic military-acceptance parts no one can find or obtain?  Many of the units they built in the 1970-80's are still operating around the country. If anything, Jacob should be remembered as someone who opened the airwaves to others, who, like myself, dreamed of getting on the air with their own calls.  He published a lot of technical articles, several books and brochures, participated in "radio" expos in Moscow and elsewhere.  His contributions are too numerous for me to list them all here. He was well known and liked

I have visited him every year since 1991.  He and his XYL Natasha made my visits memorable and warm.  He treated me as family and I reciprocated fully.  Over the years I brought him QST magazines, Callbooks, ARRL handbooks - none of which were available in Russia then.  Even examination materials, some of which I understand went into building Russia's own formal examination system for new hams.  He almost never kept anything - I gave him a gift of a Heil headset, he gave it away to his friend who needed it without a hesitation (and to my utter consternation).  Operating his station was surprisingly intense with lots of callers (he ran 600 watts into a delta in the backyard of a housing complex).  ;He would get up at dawn, and walk over to the station and work people day after day, every day, sort of a 40 or 80 meter morning beacon.  Radio was his life.

There was much to our friendship - late night talks in the kitchen with a cup of tea or something a bit stronger;  recollections of people and places and events in our lives; home-made food;  many guests who came by and who couldn't leave his home's warm inviting, humor-filled atmosphere.  We even did a 2013 New Year celebration together in St. Petersburg.  I vividly remember it all and happy he was in my life.

Phil, WB2DHY and I made several trips to Russia exploring business opportunities when it opened up in the early 1990's.  In Petersburg we were Jacob and Natasha guests.  Phil has his own story to tell, but it was a great visit and I enjoyed played interpreter for all their conversations.

He left us in May of 2014.  I flew in for his funeral and had the grim honor of carrying his cremated remains from the apartment to the cemetery.  His callsign UA1FA is etched on his tombstone.  Every year on the anniversary of his death many St. Petersburg hams lay flowers at his gravesite.

This year, when he would have been 90 years old, a multi-station, multi-country special operating event took place, to pay our common respect to a great man who brought ham radio into the lives of many people.

These days, when my thoughts turn to him, it brings a big smile upon my face.  A truly remarkable man and missed by many. 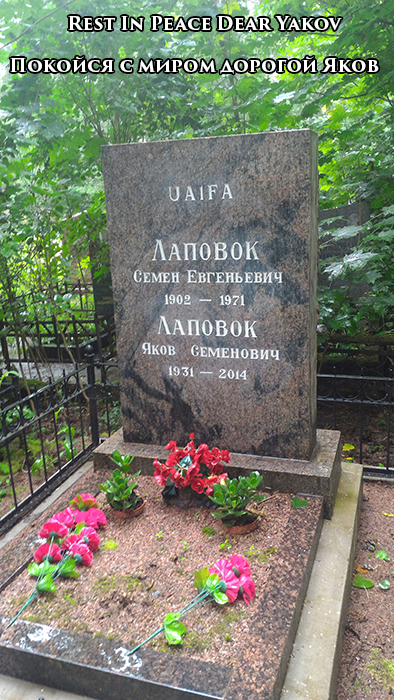 In the early part of 1992, Ed, NT2X and I traveled to St. Petersburg, Russia having created what might very well have been one of the very first new U.S. consulting companies in the newly-created Russian Federation with the aim of bringing American businesses to Russia.  This was my first trip to Russia and Ed arranged for us to stay at Jacob's apartment as guests.

Jacob and his wife Natasha, RC1BW were the most incredibly kind, warm and friendly hosts one can imagine.  Within a short few minutes, I was made to feel very welcomed and comfortable in their wonderful home.  This was one of several trips to St. Petersburg, Russia where Jacob and Natasha provided me with a home away from home.  Ed and I spent a good deal of time conducting our business and occasionally needed to impose upon Jacob to drive us to different locations, which he always did cheerfully.  Of course, I was welcomed to use his Ham radio station anytime I wanted and I did, signing R3/WB2DHY.  The pile ups were massive and fun.

In hours of conversations, as an American born immediately after WWII, growing up in dreaded fear bordering on terror of Russia and having experienced the brutality of Communism in Vietnam.  I believe my life's narrative had a profound effect upon Jacob and our friendship.  It served as a catalyst that started my journey to a better understanding of Russia, the Russian people, their history and culture.  Jacob served as my cultural instructor and tour guide.  There was no historic site in St. Petersburg that we didn't visit and in our long discussions I got a grand education in Russian history and culture that to this day plays a major role in the thinking of the Russian people.

I have not re-visited Russia in nearly three decades.  I am fairly certain I shall never have ample reason to return.  I left Russia but I never left the wonderful Russian culture and history that I will always carry within me - the surprising realization of how very similar Russians are to Americans, their unique and very special sense of humor, ability to be so very resourceful and their having a deep reservoir of strength to endure.

I shall always remember my friend, Jacob!

During Christmas and New Years 2019 Ed, NT2X was our guest here in Virginia.  On New Year's eve at about 1:00 p.m. on December 31st Ed placed a phone call to Natasha in St Petersburg, Russia.  Since New Years comes 11 hours ahead of east coast U.S.A. we were phoning Natasha as it turned 2020 in European Russia.  Ed had coached me how to say "Happy New Year" in Russian.  With Ed acting as translator, I was thrilled and moved to be speaking with her for the first time since 1993.  Natasha had a fellow Russian Ham scan the above QSL card and email it to me - a warm gesture I will always cherish.

A worldwide Special Event operation took place to honor an outstanding amateur radio operator, an amazing electronic engineering designer of Russian radio equipment, a beloved and extraordinary person of great compassion and understanding, Yakov "Jacob" Lapovka, UA1FA.  He founded the Union of Radio Amateurs of Russia - SSR (equivalent to the American Radio Relay League - ARRL).  This operation was held to coincide with his 90th birthday.  Participating stations and operators worldwide were signing their call with the number "90" inclusive.  In certain countries particular Special Event calls were authorized.

Points were awarded to stations allowing them to earn both Certificates as well as Plaques.  All stations worked will receive QSL cards via their QSL Bureau with an option to QSL directly.